From start to finish, the brewing process starts and ends in our mash-kettle.

● Desired strike water temperature and volume is entered into the command center. The PLC automatically fills the tank to the correct level and our burner maintains the strike water temp we enter. Before water enters the kettle, it passes through 1 pad filter, 2 carbon block filters and our tankless water heater.

● Once the mash-kettle is full, we activate the mixer and our milled grain is added to the water using 20 gallon buckets. Once the grain and water is mixed thoroughly, it will sit in this tank for 1.5-3 hours where it will undergo a series of temperature steps until the starches in the grain have been fully broken down into sugars. 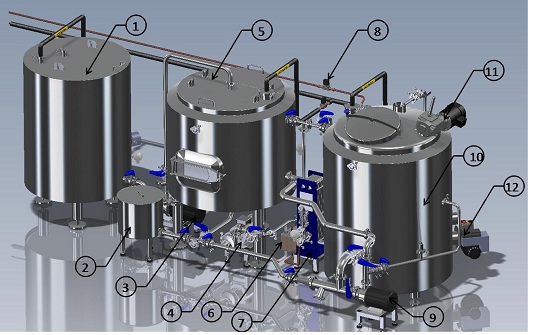 ● The complete mash is then pumped to the Lauter Tun where the sweet wort will be strained from the mash while hot water is sprayed on top of the mixture. This process is called sparging. In order to keep the grain bed from compacting, the wort is gravity drained into a lautering grant. This is a small tank between the lauter tun and the pump that prevents the pump from pulling the wort faster than it can gravity drain. From the lautering grant, the wort is pumped to an insulated holding tank, while the second half of the batch is mashed in the mash-kettle.

● Once mash #2 (follows the same process as #1) is transferred to the cleaned out lauter tun, the wort in the holding tank is pumped into the mash-kettle for the boil. During the boil hops are added to the brew. Longer exposure to the boil will extract bitter flavors while shorter exposure will allow for more aroma in the finished product.

● The clear wort is pumped through our heat exchanger which takes the temperature from 200+ deg F to the yeast pitching temperature - 70-75 deg F. The heat exchanger operates in a manner where wort is pumped through a series of thin plates while cold water is pumped through a series of neighboring plates, allowing the heat from the wort to pass through the plate and into the cold water. Since our ground water is not colder than our target temperature at times during the summer, we need to first cool the cooling water. This is done by passing the water through a pre-Chiller that uses recirculating glycol at 28 deg F. This also cuts back on the amount of water we use.

● As the wort fills the fermentor, yeast is pitched and the tank manway is sealed. After 1-2 hours, the fermentor is chilled to our starting fermentation temp - between 58-68 degrees depending on the beer. During the fermentation, yeast consumes the sugars in the wort and excretes CO2, alcohol and other flavor compounds. Towards the end of the fermentation, a special regulator called a Spundapparat is attached to the tank to trap the remaining CO2 in the beer. This naturally carbonates the beer and gives it a nice smooth head.

● Once fermentation activity ceases, the tank is cooled to about 35 deg F. This helps the yeast in suspension to fall to the bottom of the tank to be harvested for the next brew. The period of cold conditioning also allows the beer flavors to mature and stabilize.

● Once the beer is finished, it is kegged and sent to bars, restaurants and our tasting area.