How to Reduce Beer Foam?

Beer is a low-alcoholic wine containing carbon dioxide, which is brewed by yeast fermentation with barley malt, hops and water as the main raw materials. But there is a big problem with drinking beer, that is, the beer foam is always over. As a Cone Fermenter Factory, let's explain it to everyone.

When the beer is opened, a large amount of carbon dioxide bubbles are poured out of the bottle mouth, which is occasionally encountered.

This phenomenon occurs because beer, the main raw material of barley, is infected when brewed in beer brewing equipment. 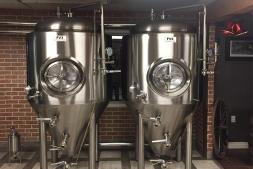 However, these fungi attached to the surface of barley are rich in hydrophobin on the surface, and these hydrophobins adsorb carbon dioxide generated during fermentation in the brewing process of the brewed beer equipment.

When the beer contains too much carbon dioxide, a large amount of foam will flow out when the bottle is opened.

In order to cope with this phenomenon when brewing with Brewing Fermentation Equipment China, hop extract is added as a defoamer.