An Introduction of Beer Yeast

Beer yeast is a crucial component in the production of beer, and as such, it deserves its own spotlight. In this article, we will take a deep dive into the world of beer yeast, exploring its history, types, and functions. 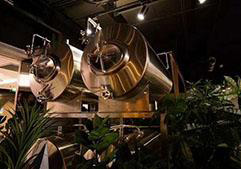 In addition to its role in fermentation, yeast also plays a crucial role in the clarity of the finished beer. During fermentation, yeast cells will rise to the top of the wort and form a layer called a "krausen." The krausen will eventually fall back into the wort, taking with it any impurities present in the beer. This process, known as "flocculation," helps to clarify the beer and improve its overall quality.

There are several factors that can affect the performance of yeast in the brewing process. One of the most important is the health of the yeast itself. Poorly handled or poorly stored yeast can result in off flavors and a stalled fermentation. Proper handling and storage of yeast, on the other hand, can result in a successful fermentation and a high-quality beer.

Another factor that can impact the performance of yeast is the environment in which it is used. The pH and temperature of the wort, as well as the presence of oxygen, can all affect the way in which yeast performs during fermentation. It is important for brewers to carefully control these variables in order to achieve the desired results.

In conclusion, yeast is a vital component in the production of beer, and the type and handling of yeast can greatly impact the final flavor and clarity of the beer. From its ancient roots to its modern-day importance, yeast will always be a crucial element in the world of brewing.

If you want to know more information about beer yeast, please contact us. We will provide professional answers.