How to Choose Commercial Brewing Equipment?

As a Best Brewing System Supplier, share with you.The following is a summary of the main issues considered and our solutions. Vessel commercial brewing required for brewing requires several different types of stainless steel large containers. First, water is heated in a Commercial Brewing Equipment called a hydrothermal tank. Hot water is then transferred to a container called Mash /Lauter Tun, in which ground grains are soaked to extract delicious sugar and seasoning. 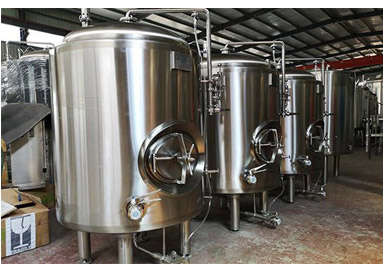 A moment later, carbohydrate-rich water is transferred to a boiling kettle next to the saccharification furnace and heated to boiling temperature by direct gas burner, indirect gas burner, steam or electrical components. Add hops during boiling. After completion, the boiling kettle will become a whirlpool, forcing the water into the whirlpool and separating it from the larger particles in the solution. Boil Kettle /Whirlpool and Mash /Lauter Tun are usually adjacent to each other, with platforms and steps between them, so winemakers can visually monitor the process and add ingredients. collectively referred to as "beer house'. As breweries expand, they usually add a third container to accommodate dedicated whirlpool tubs. This can increase customer turnover and improve labor efficiency, so more beer can be produced every day.

Examples of breweries consisting of mash / filter buckets, platforms and boiling kettle. Then the hot liquid is cooled and transferred to the fermenter, and yeast is added to the fermenter, and the magic of converting sugar into alcohol begins for days to weeks. and then stop the fermentation process and transfer the beer to the Brite tank, where it is further cooled so that the remaining particles in the beer fall to the bottom of the tank. After completion, beer can be chopped or bottled / canned for consumption.

The breweries of most start-up micro wineries are 10 to 30 barrels in size and have fermenters / brine tanks of the same size.

Adjusting the size of the brewery is a balancing act for new breweries that can not determine sales and growth. too big a start can put pressure on initial spending and make a batch of bad beer a costly mistake. Too small to start will be difficult to meet the demand, and the cost of each batch of ingredients will increase because the smaller system uses hops less efficiently. Many winemakers tell you that doubling the size of the system is far from doubling the cost. Usually, this is true, but it is not a good reason to buy larger systems.

consider the amount of physical space available in breweries. If there is not enough space to add additional fermenters and salty pots in the future, it would be unwise to start with a large wine system. It is also important to consider the net height of the ceiling compared to the diagonal height of the fermentation / brine container. These are the tallest ships. Unless your space has a high dock door, these tanks require sufficient ceiling height to tilt to be able to stand inside the space. Large breweries usually open an opening on the ceiling to put it into these cans.

Consider starting with a smaller brewery that has space to add dedicated whirlpool baths in the future. The size of the fermenter / brine tank is then adjusted to twice the size of the brewing chamber. When the business is slow, the tank can be filled in half, and when the demand increases, the double batch can be filled in the brewery. This doubled the capacity of the brewery and the initial cost was only about 30 per cent higher than the need to purchase additional fuel tanks.

The general rule of thumb is to buy enough to get you through the first 2-3 years of production for fermenters and lower fermenters. You can Used Brewing Equipment to calculate the maximum annual capacity of the fermenter:

Our company also has Beer Storage Tank for sale, welcome to consult us.