Home >> News > Last News > What Should I Do If the Yeast Smell Appears in the Fermentation Broth of a Conical Tank?
Last NewsExhibition

What Should I Do If the Yeast Smell Appears in the Fermentation Broth of a Conical Tank?

A yeasty taste is an unpleasant odor, especially when the yeast is autolyzed. Beer with a yeasty odor is often characterized by high pH, dark color and poor foam performance. 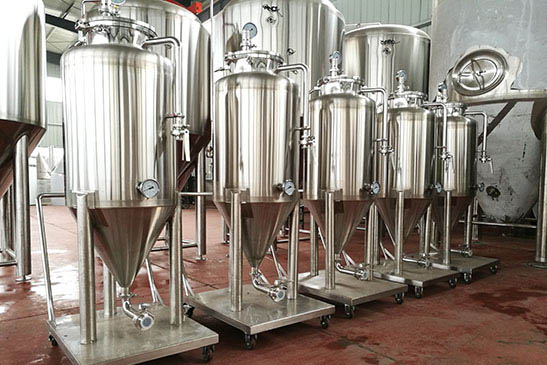 The main causes of yeast odor in conical tank fermentations are the following.

1. The temperature control is not reasonable, at the end of diacetyl reduction, the temperature difference between the following section and the middle and upper section is too large, which will cause strong convection in the liquor, resulting in difficulties in yeast settling and autolysis.

2. The amount of yeast added is too large, or the number of generations used is too much, and yeast aging is easy to occur autolysis.

3. High storage temperature and long storage time cause autolysis of yeast and release of fatty acids. These substances will make the fermentation broth with uncomfortable aroma and have a negative effect on the foam, among which ethyl acetate and ethyl dodecanoate can work together to form yeast flavor when the content is high.

4. Precipitated yeast is not discharged in time, old and weak yeast stays in the tank for too long, plus the cone bottom affects the cooling effect due to the accumulation of too much yeast, resulting in the yeast at the bottom of the tank being in high temperature conditions for a long time, thus causing yeast autolysis and dispersing into the liquor, bringing yeast taste and post-bitterness to the fermentation broth.

5. Hygiene problems such as pipeline or dead-end growth of mold, will also lead to yeast odor in the fermentation broth.

For the above reasons, the following preventive measures can be taken.

1. The yeast should be discharged in time during the post-fermentation period of the conical tank to prevent the yeast from gathering too much and producing autolysis.