Home >> News > Last News > How to Deal with the Abnormal Phenomenon in the Use of Conical Tanks?
Last NewsExhibition

How to Deal with the Abnormal Phenomenon in the Use of Conical Tanks?

How to deal with abnormalities in the use of conical tanks?

Conical tank has been widely used in China, but due to the design and production of the tank itself, the arrangement of the process piping, instrumentation errors, supporting equipment and components of the perfection of many aspects may have some problems, coupled with the operator's own factors, resulting in the conical tank in the use of the process will appear some abnormal phenomena, roughly summarized as follows. 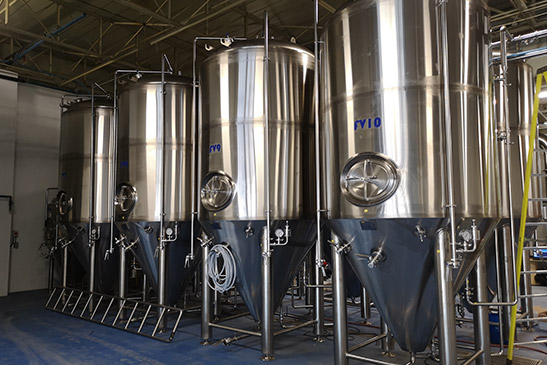 Air leakage is a common phenomenon in the use of conical tanks, mainly occurs in the top part of the tank. The top of the tank is installed with overpressure valves, vacuum valves and CIP cleaning devices and other accessories, and connected to the tank through the flange, if the sealing performance is poor or into the tank, fermentation, filtration and other process valve action caused by poor sealing, will lead to conical tank leakage, so that the fermentation process tank pressure is difficult to maintain, the fermentation broth CO2 content is low. The solution is to frequently check and clean the overpressure valve and vacuum valve, and replace the gasket in time.

Due to the quality of the instrument and the improper use of the operator, the data measured by the instrument is distorted, which affects the quality of the product and the normal operation of production to varying degrees. This situation is more common, mainly in the temperature, liquid level, pressure and cleaning effect. To solve such problems, one is to use a better quality instrument; the second is to frequently check and regularly calibrate the instrument, and to prevent errors caused by improper operation.

As the conical tank up to more than 10 meters convection effect is poor, resulting in temperature differences between the top and bottom of the tank liquor, liquor density is not the same, and the CO2 content is low and high, so that the fermentation solution exists gradient stratification phenomenon, to control the quality of liquor in the tank brings some difficulties. Ways to reduce the phenomenon of gradient distribution usually include: reasonable use of cooling jacket; set up two sampling ports at the top and bottom to take samples and mix them separately, so that the samples are representative; install a CO2 washing device at the bottom of the tank to wash the fermentation broth and promote uniform mixing of the liquor at the same time.

Due to the large surface area of the tank, if not cleaned properly, it will cause the accumulation of scale and easy to contaminate bacteria. In addition, the external piping of the tank is more, such as ignoring the cleaning and sterilization of each interface, also very easy to cause bacteria. In general, the process hygiene requirements of conical tanks are very strict, and once the liquor in the tank is contaminated with bacteria, it will have a serious impact on product quality and cause great losses, so we must strictly follow the relevant regulations for cleaning and sterilization.

The temperature at which beer freezes is called the freezing point. The freezing point of beer varies depending on the alcohol content and the concentration of the original wort, and can be calculated by the formula (4-1):

Tank deflation causes more serious consequences, the light tank damage, the heavy tank scrap. This phenomenon occurs in the empty tank cleaning conical tank just after the wine, the tank still retains a considerable amount of CO2, such as immediately with alkaline water (especially hot alkaline water) rinse, the CO2 in the tank is immediately absorbed by the alkali, and then rinse with cold water, the temperature plunges, both factors will cause a vacuum in the tank, and if the vacuum valve into the speed can not keep up, the tank is deflated by suction. So the empty tank cleaning must be exhausted before the tank CO2 (available compressed air replacement), and then sprayed with water 10 ~ 20min, and then you can use alkaline detergent cleaning.