Brewed beer may still be very strange for many people, in fact, wine is like cooking, wine can be as their own hobbies, but also can be a good project for entrepreneurship.

First of all to buy beer brewing equipment, including malt mill, saccharification pot, cooler, filter plate, fermentation tank. Then prepare raw materials, including barley malt, hops, yeast, and water. Now make 20 liters as example, the ratio of water and malt is 4: 1, the first water to put the pot of sugar heating, the water heated to 30 to 50 degrees Celsius. In the heating time we began to crush the malt, at 54 degrees, 62 degrees, 68 degrees and 72 degrees were to stay 20 minutes, 78 degrees began to filter with a filter plate, then clean barley with 78 degrees of water, the washed wort and the previously filtered wort water are returned to the saccharification tank to start heating and boil, began to add hops, 20 liters of beer plus 12 grams of hops. Family brewing generally do not have too much trouble, wine technology can be practiced slowly. 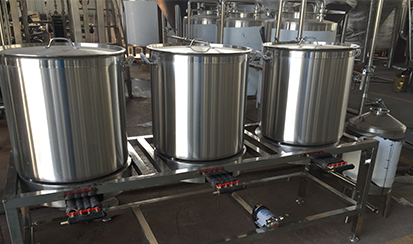